Transport of the world’s most powerful HVDC transformer

The route from the Siemens transformer plant to the bayernhafen Nuremberg was planned well in advance, bridge calculations and transport statistics were prepared using the vehicle or load dimensions / weights and then gone through in driving simulations.

At the end it was the expected millimeter work – the transport went to the limits of technical feasibility.

The fact that the loading was successfully implemented is due to the project logistic providers of the Züst & Bachmeier Project GmbH in Nuremberg. The company, part of the Universal Transport group, is responsible for the planning and execution of the transportation logistics of the world’s most powerful transformer destined to the GU Quan High Voltage Direct Current Transmission (HVDC) project in China.

It is the first of a total of seven 1,100 kV HVDC transformers that Siemens and a partner company will supply for the world’s largest HVDC plant. Over 3,324 kilometers, the transformer of the Chinese grid operator will transmit electricity with a total transmission capacity of 12 gigawatts from Changij in northwest China to the populous east coast in the province of Anhui. The HVDC line is scheduled to go into operation at the end of 2018.

This world record transformer from Siemens was developed, manufactured and tested in the Nuremberg transformer plant and is to be used at the GUQUAN converter station in China.

The first eight kilometers of the several thousand-kilometer journey, within Nuremberg, from the transformer plant to the heavy-duty logistics center of the Züst & Bachmeier Project GmbH – where the transformer was lifted to a special barge with the permanently available 600 t strand lift – were particularly demanding.

With dimensions of 13.60 meters x 6.14 meters x 5.90 meters, which the transformer measures at a weight of 535 tons, transport could only move at walking pace. In an underpass, it was particularly tight and along the route a few cars and trucks, which were parked incorrectly, had to be moved out the way. After just under ten hours driving time, this transformer of superlatives reached its interim destination in the bayernhafen Nuremberg.

The transformer was transported by barge to Antwerp where it was taken over by a heavy cargo vessel with its own harnesses. He is currently on a voyage to China and will then be transported to his destination in the north of the republic.

After completing this transport, the next one is already in planning. For this project a total of 4 transformers will be delivered from Nuremberg. The next transports of these super heavyweights with the same transport dimensions will be in the coming weeks. The professionals of the project team of the Züst & Bachmeier Project GmbH are working hard again to realize these challenges. 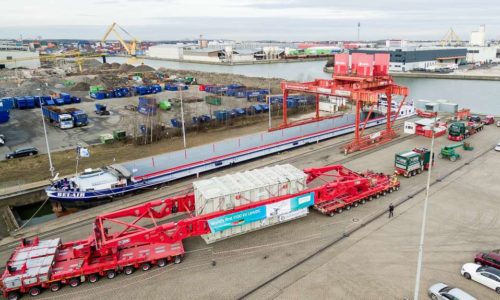 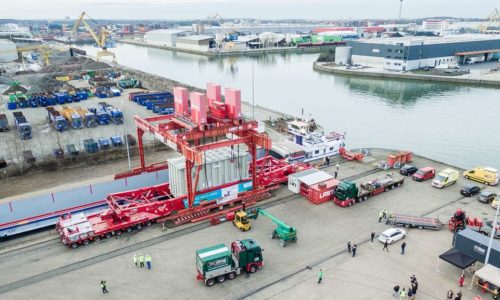