Since October 2016 the first vehicle fleet of Universal Transport Egypt (UTE) is operational. Tell us how the cooperation came about and what your expectations are.

Bentien: In spring 2015 Universal Transport met Mr El Dahsahn at a conference of the Global Project Logistics Network (GPLN) in Thailand. It very soon aspired that cooperation would be a win-win-situation. Universal Transport has the necessary know-how in all things heavy /large / wide load whilst Mr El Dahsahn and his brother have the connections as well as the knowledge of the Egyptian market. It took a year and a half to turn an idea into our own branch in Egypt and thus create UTE.

El Dahsahn: Here in Egypt there are three maybe four companies that offer heavy /large / wide transport so far. Their equipment however is mostly outdated. UTE is the only company in the country to offer modern machinery and vehicles. Apart from that German companies have a very good reputation in Egypt. With our own equipment and well trained staff we want to set new standards.

Talk us through your first project and tell us about the challenges you face.

El Dahsahn: At present we are transporting the first power plant components from the port of Adabiya to a nearby interim storage facility. These components are then transported to two of the largest power plants in Egypt, close to Beni Suef and New Capital, New Cairo. The heaviest components of the first shipment weight around 190 tons. Due the dimensions of the cargo the transport is a kind of push-pull-unit (pull-shear-unit) – which is a very special challenge.

Bentien: As this is our very first project in Egypt it is very important to have our European specialist on location. Planning a project is easily done in theory. The practical process however often throws up unforeseen obstacles that need solving. This demands a certain kind of flexibility in spite of standardised process instructions. It would be fair to say that the first project of a new branch is always the most demanding. This job will keep us busy for about a year. Altogether we have 32 centres, 6 tractor trucks as well as 2 low loaders with 15 employees working on this project. In addition we have a number of very experienced German truck drivers on local to teach the Egyptian truck drivers technical details and load security.

What is the main difference between the Egyptian and European Branches?

El Dahshan: There is a huge difference in the operational execution of heavy /large / wide transport between Egypt and Germany. Compared to Germany the cost for road charge is exorbitant in Egypt. In some cases it is high than the total cost of the vehicles involved. In comparison to Germany we are only allowed to drive on the roads in daytime outside of cities and only at night-time within the cities.

Bentien: Working here is an exercise in patients. Granting of permissions takes much longer than in Germany. You have to learn to live with the fact that due to unforeseen circumstances a transport simply stops for two days or so. Also a number of infrastructural projects are very slow to take off. All matters concerning bureaucracy i.e. customs clearance, permits and port handling our Egyptian partners are absolutely irreplaceable.

What prognosis can you give for the Egyptian Market in the near future?

Bentien: Predictions forecast around 7 Million freight tons to be transported around Egypt in coming years. Around 2000 wind power plants are planned for example.

Infrastructure projects as well as many more power plants will play a key role. We are very open and positive towards this exciting market place. We will use all our flexibility and vehicle capability for further operations and upcoming projects in Egypt. 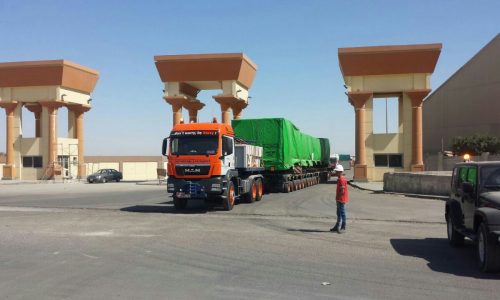