Currently Hamburg is undergoing major rebuild and expansion. For instance in HafenCity the tube line U4 is being extended.

As the delivery had to be made to two different sections on the building site, two different routes had to be taken. At the end of October 2016 the first two bridge elements were delivered to the eastern construction section. In order to achieve this, the police had to block off Germanys second largest road bridge, the so called Köhlbrandbrücke. This enabled our transport crew to use all traffic lanes on the bridge. A week later the second transport had to use a different route. The remaining two bridge elements had to be delivered to the western construction section. This part of the transport also went without a hitch.

HafenCity is one of Europe’s largest urban redevelopments. Around the bridges spanning the river Elbe vast areas of living quarters and office buildings are being built. This calls for a connection to the city’s public transport network. Hence the extension of subway line U4 which has been work in progress since mid 2013. Universal Transport has delivered four bridge elements and thus played a key role in finishing this huge project. 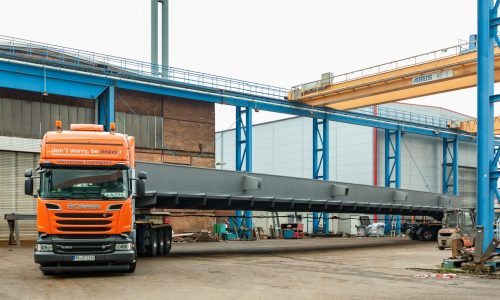